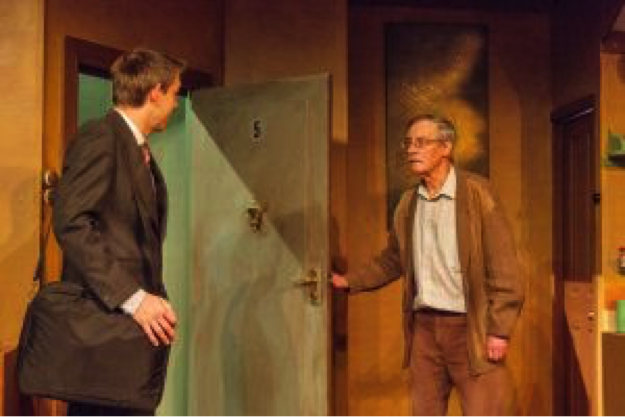 This delightful two-hander has been produced around the world since 1996. It’s tender yet thought provoking, and its messages lose none of their impact despite the twenty years of ‘progress’ since it was first performed.

Director Catherine Potter was “drawn to Jeff Baron’s plays because of the intimacy of his work. In Visiting Mr Green he introduces us to two disparate characters, both isolated and both hiding a secret”. She translates that intimacy into a production that is warm and intensely personal, gently exposing all the underlying complexities of the characters and the secrets that they hide.

Ross is a young Harvard graduate who is doing well. Mr Green is a crusty old Jewish widower, living alone in a New York tenement. Ross almost hit Mr Green as he was crossing a busy street. His ‘visits’ are a community service based upon the near accident. He wasn’t really in the wrong – and Mr Green doesn’t really want him around. But Ross persists, and thus develops a strangely poignant relationship that allows both characters to lower their defences.

Dave Kirkham is a suitably crabby and reclusive Mr Green. With his usual height and energy reduced by a stooped back and sluggish, deliberate movement, his Mr Green is ……