By Rakini Devi. Dance Projects and Riverside Theatres. September 22 and 13, 2017 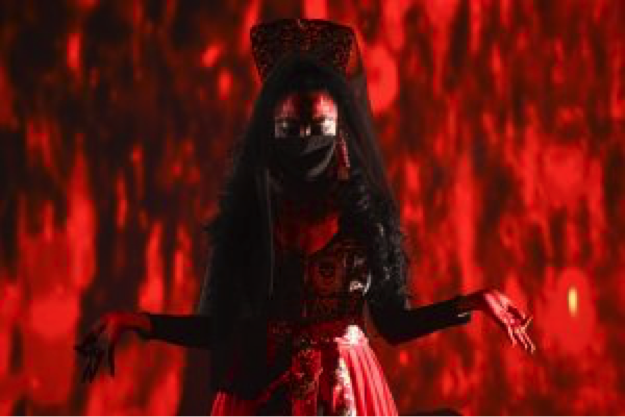 Over 27 years, Rakini Devi has developed four ‘theatre works’ to the Kali, the Hindu goddess who is the divine protector and destroyer of evil. As the culmination of her doctorial thesis into Kali iconography and how sacred Hindu iconography can relate to secular feminism, Urban Kali is a protest against the rise of racial and misogynist atrocities in India.

Devi mixes traditional Indian classical dance with visual images and sound effects in her interpretation of these themes. An unsettling example is the image of disembodied blood covered hands wringing over a basin of blood while a voice over chillingly describes the many and horrifying ways in which new born baby girls have been murdered.

Concentrated spotlights pierce the otherwise dimly lit stage, highlighting the intricate hand and foot movements, rigid control and shimmering costumes in the more traditionally choreographed segments of the performance. But when Devi rolls and writhes across the floor in a more contemporary, interpretative movement, she merges into shadow and is lost in the darkness.

Pervading the performance is a jarring discordance of sound, so loud at times that, despite the fact that I covered my ears, they were still hurting an hour after the performance. Such volume is unnecessarily invasive and detracts from rather than enhances a performance, especially in a small theatre space where the acoustics are particularly good. For me this became a painful distraction from a performance that, as with many interpretative abstractions, requires patient attention and tolerant concentration from its audience.