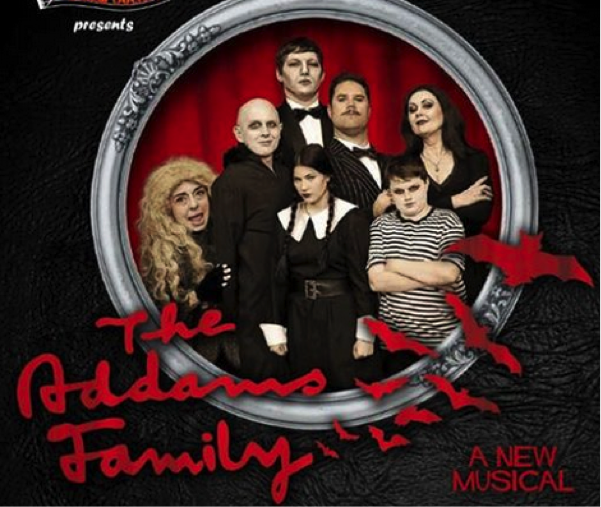 Headstones and eerie, blank-faced, white clad figures line the way as the audience is ushered along Cemetery Lane to Dural Musical Society’s production of The Addams Family. Their small stage is converted to the lonely home of the macabre characters that entertained television audience over 64 episodes between September 1964 and April 1966.

Here Gomez and Morticia Addams deal with the disturbing news that their daughter “Wednesday’s Growing up” and is in love. She confides in her father, asking him to ensure “One Normal Night” in order to meet her boyfriend’s family. Both families, and ancestors called from the dead, are thus involved in a bizarre dinner party that encompasses all the weirdness of the original series – with lots of songs and some classic one-liners.

Directed by Kate Gandy and Camilla Bellstedt, with choreography by Mandy Winter, this production typifies the ‘family atmosphere’ of which Dural Musical Society is so proud. For example, the 19 ‘ancestors’ bring together both young and older members of the society, as well as some new faces. In their various spooky ‘reincarnations’ they provide an enthusiastic chorus to the whacky events over which they stand sentinel.

The members of the Addams family are portrayed with the appropriate poker faces and typical bleak humour of the original characters.

Andrew McLean and Annette van Roden become very authentic facsimiles of Gomez and Morticia Addams – and their long-lasting but peculiar relationship. Van Roden, with long black hair, wears figure-hugging purple and black, with spiky stilettoes. McLean, of course, wears a pinstriped suit and sometimes a flashy smoking jacket. Though their dilemma over Wednesday’s ‘disclosure’ threatens the very foundation of the family, all is resolved in a dashing “Tango De Amor” in the second act.

Keira Bellifemine brings pouting, stiff-shouldered determination to the role of Wednesday Addams, “Pulled” between who she is and what she wants. This is an exacting role and Bellifemine communicates the emotions that confuse the character in strong and expressive notes.

Her brother Pugsley is played by Toby Rowe who shows a mature understanding of this strange, torture-loving youngster and his concern about losing the sister he relies upon to torment him.

Brian Chapman is a real audience pleaser as he cleverly recreates the strange voice and quirky gestures of Uncle Fester. His rendition of “The Moon and Me” and his rocket trip to reach his ‘love’ are highlights of the production.

So too are the antics of Faith Jessel as she injects cackling humour into the role of Grandma Addams. Bewigged and bent, she casts aside her usual poise to become a wizened sorceress, her comedic timing making the very most of this gift of a role.

Liam Dailly hovers above everyone as Lurch. ‘Thing’ makes some ‘handy’ appearances from the wings and Cousin Itt wanders in every now and again.

They all come as a great shock to Wednesday’s boyfriend Lucas Beinecke (Mitchell Hawkins) and his father Mal (Tim Chivers), though his mother, Alice (Raelene Buecker) is a little less bemused, especially when, drugged (accidently) by Pugsley, she manifests her real self in a very upbeat ‘disclosure’.

Accompanied by a six-piece band, this large cast sings and dances its way through nineteen songs and many scene changes. It is an entertaining production, especially for those ‘boomers’ who were addicts of the original Addams family.