Evan Goldman is about to turn thirteen and is looking forward to his Bar Mitzvah party. Then his parents announce that they are getting divorced … and his mother takes him from New York to the little country town of Appleton, Indiana – “The Lamest Place in the World”. It’s all a bit too much! How will he celebrate this important birthday in a country town where he doesn’t know anyone. In a bid to get in with ‘cool kids’, he learns that “What It Means be a Friend” is more important than being popular.

Jason Robert Brown’s score is catchy but challenging. His lyrics – and the book by Dan Elish and Robert Horn – sit well in the voices of the young cast that director Emily Taylor has attracted to this production by Hills Musical Theatre Company. Taylor, musical director Matthew Herne and choreographer Gai Reckless, take 42 enthusiastic young performers through the ‘rites of passage’ Robert Brown has incorporated into the musical – and, in the process, give them further experience in staging, timing and being part of a ‘theatre community’.

Brendan Godwin takes on the role of Evan with mature assurance and control. Jazmin Mancuso and Emma Davies alternate as Patrice, and Jack Fahd takes on the difficult role of Archie. All have strong, resilient voices that reach the challenges of the difficult phrasing of the score in songs such as “Tell Her” and “If That’s What it Is”. They also find the different emotions portrayed through the characters. Fahd particularly depicts an Archie that uses humour and optimism to hide the strain of being ‘different’. His Get Me What I Need is a memorable moment of the production.

Jeremy Barons is nonchalantly ‘cool’ as Brett Sampson, who with his off-siders Eddie (William Turner) and Malcolm (Sebastian Barons), bring the humour of the ‘try hard’ gang to the production. In the number, “Hey Kendra”,they introduce Isabella Jade Gilbert who plays the saucy and manipulative Lucy, and Selin Idrisoglu, who is prettily innocent as the sought-after Kendra.

They are supported by a group of eager young performers who fill the stage with energy and aspiration. In the song “Opportunity”, Gilbert leads an ensemble of peppy cheerleaders; and in “Bad, Bad News”,the ‘boys’ have a chance to strut their stuff.

It’s always hard to ‘set’ a production on a stage that during the week is a multi-purpose school auditorium, but the design for this production, co-ordinated by Jonathan Burns and constructed by Keith Macbeth, sets place and time simply with a minimum of fuss. Two flats suggesting New York turn to become the countryside of Appleton. Folding screens turn from lockers to become a basketball backboard. The simplicity and portability of the design allows ease of movement and relatively speedy scene changes. 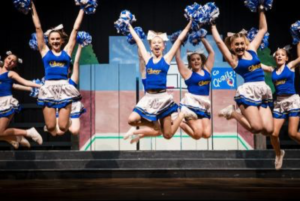 This production is bright and cheerful. It is exudes the enthusiasm and energy of aspiring young people who are eager to learn. And the courage and perception of a director and theatre company who have faith in young performers and give them the chance to shine.

This review is also published in Stage Whispers magazine.