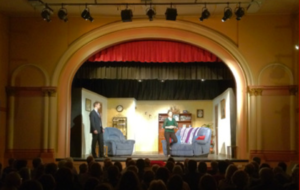 Community theatre companies are often more part of their community than people realise. Such is the case with Richmond Players – and once again they teamed with the Hawkesbury Historical Society last Saturday to pay homage to the first published Australian poet and playwright, Charles Harpur.

Harpur, who was born in Windsor in 1813, became a prolific writer in various periodicals of his time. Friend of Sir Henry Parkes, mentor to poet Henry Kendall, he worked in Sydney, in the Hunter and eventually, as assistant Gold Commissioner on the South Coast, where he died in 1868.

Michael Falk, currently of the University of Western Sydney, has made an extensive study of Harpur’s life and his prolific writing -– poetry, a play and sometimes critical political commentary.

It is 150 years since Harpur’s death (10th June, 1868), and a small, but captivated audience, gathered at the beautiful Hawkesbury Regional Museum to hear Falk’s intriguing insights into Harpur’s life and his work – and a reading of three scenes from his play, The Bushrangers – a  Play in Five Acts.

Led by president Sean Duff, who played the bombastic magistrate, Tunbelly, eight members of Ricmond Players gave a lively reading (with sound effects!) of excerpts the play based on the story of bushranger, Jack Donohue., and compiled and adapted by Historical Society member Jan Barkley-Jack.