With the wintery Sydney sun shining through the amazing stain glass wall behind him, Bernard Walz wowed an audience of 150 in the second of the Galston Concerts for 2108.

Performer, conductor, composer, orchestrator and arranger, Walz is perhaps best-known for The Good Old Days Concerts at the Sydney Town Hall. He also tours on prestige cruise lines and has performed at London’s Royal Festival Hall with the BBC Concert Orchestra.

A true showman, Walz not only captivates the audience with his wizardry at the piano, but with the light, humorous repartee at which he is also a master.

Robert Harris and Dorit Herskovits, founders and Artistic Directors of the Galston Concerts, are usually playing themselves, but on Sunday they watched from the audience as Walz paid tribute to Claude Debussy, Scott Joplin and Leonard Bernstein. From the delicate strains of Clair de Lune to the syncopated ragtime rhythms of Maple Leaf Rag; from the more melancholy notes of The Bethena Waltz to a medley of the beautiful songs from West Side Story, his light, flying fingers made the grand piano seem like an orchestra in itself.

In the second part of the program he introduced Young Performer vocalist, Brea Holland. A student at The McDonald College and the Sydney Conservatorium of Music, where she is studying Grade 8 Classical Voice and Grade 8 Musical Theatre, Holland entranced the audience with the range and power of her voice and her confident, engaging performance skills. From the sultry notes of Summertime, to the irony of Cole Porter’s Always True To You Darling in My Fashion to the tenderness of the Gershwins’ Someone to Watch Over Me, Holland’s talent shone as brightly as the filtered rays of the late afternoon sun behind her.

Walz brought the concert to an end in virtuoso style, performing a ‘symphony’ of titles suggested by the audience. In this he mixed, merged and mingled Phantom of the Opera, The Entertainer, The Way We Were, Ode to Joy, Misty, Jerusalem, and, believe it or not, Chopsticks and The 1812 Overture, to the delight of a very appreciative audience. 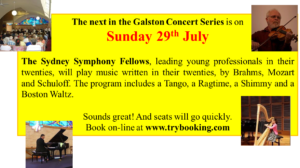