The beautifully restored Independent Theatre, with its fine acoustics, was a fitting venue for The Metropolitan Orchestra’s third concert of the year. Led by Sarah-Grace Williams, Artistic Director of TMO and its Chief Conductor, the program featured a twenty-three-strong string ensemble playing Serenade in E-Flat Major, Op 6 by Josef Suk, followed by popular Australian tenor Daniel Belle presenting highlights from opera and musical theatre.

Fresh from performing Hadyn’s Creation with The Sydney Philharmonic Choirs only a fortnight before, TMO moved with smooth and meticulously rehearsed ease to the varied movements of one of Suk’s more cheerful compositions, which are best and adeptly described by Andrew Doyle in his program notes:

“ … The first movement is a fluid Andante con moto which appears with a beautiful, flowing violin melody. The pace picks up in the second movement and the most memorable movement is the Adagio, the third movement. The beautiful opening cello melody develops a rich, emotional intensity that endears this work to string orchestras … ”.

This thirty minute harmony of strings accentuated the practised finesse of every performer and the sensitivity with which Williams’ skilful direction heightens the variations in tempo and emotion that are intrinsic to each of Suk’s four movements – and the differing musical character required for the second half of the program. 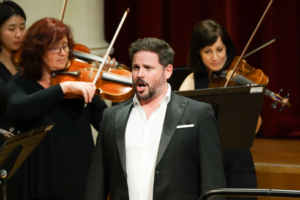 There, Daniel Belle treated the already delighted audience to a sequence of pieces especially selected from his wide opera and musical theatre repertoire. From Nella Fantasia, to Some Enchanted Evening (South Pacific; from, Anthem (Chess) to Vesti la Giubba (Pagliacci; from If I Loved You (Carousel) to Bring Him Home from Les Miserables, Belle literally ‘wowed’ the audience with the range, power and emotion of his impeccable execution of each of the well-loved and musically complex pieces.

The ‘vibe’ between Belle, Williams and members of the orchestra was almost effervescent – as was the response of the audience as the last notes of each beautifully orchestrated and performed work vibrated around the theatre.