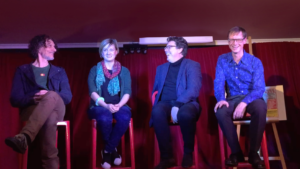 Sometimes the best ideas are sparked by the simplest things. Take a few comics telling stories after a Stand Up gig. Realise their stories are even funnier than the gig itself! Why not share this with a wider audience? In an intimate space? With a glass of wine? And call it BESPOKEN WORD?

Storytelling is fundamental to every society, every family, every group of friends. It’s the basis of history, literature, theatre, opera, music. It’s how we share, learn, grow … entertain. And the irrepressible John Knowles, Kate Iselin and their friends do all of that every second Wednesday of the month in the little theatrette downstairs at the “live, local and pokie free’ Petersham Bowling Club. 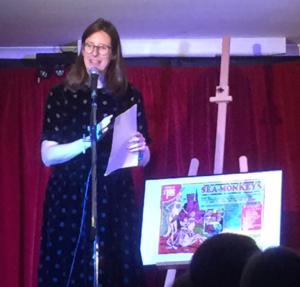 A simple stage, a microphone, 4 chairs, some topics in a hat, a few people who are happy (and daring enough) to share their memories, and an enthusiastic audience … that’s all it takes to produce a lively, funny – even a little poignant – evening.

Last Wednesday night Iselin began the show by introducing CJ Denning who told us of her first night in Australia, holed up Harry-Potter –style on the floor in a cupboard in a share house in Sydney. And Naomi Mourra, who shared the surprise of finding an unexpected, used, GST charged feminine hygiene ‘item’ stuck to the seat of her pink motor scooter.

After interval Knowles was joined by the bowling club’s own George Catsi, Comedian Jen Carnovale, and James Valentine, afternoon presenter on ABC Sydney, for a session of “I Can Top That”.

What a weird and wonderful range of stories they told!  In Quick fire quips, Catsi  described his grisly effort to fit dentures into the mouth of a cadaver in his nursing days. Carnovale took us on camping trip to the Hunter where a candle set fire to the tent. This inspired Valentine’s memories of his teenage candle-making business and Knowles’ Grade 8 story of selling Christmas-character candles to raise money for a school trip, only to find the money he’d raised was merely the deposit which should have been paid much earlier – and therefore missing out on the excursion. Poor John!

The topic Road Trips took us ‘on tour’ with Valentine and a rock band in a Falcon station wagon where he was the only driver – mainly because all the others had lost their licences. He told of being pulled over, and facing a burly policeman on his own, while his fellow travellers ‘ditched’ some illegal substances. Catsi ‘topped that’ with the tale of hitching a lift in a Combi van in Tasmania, ending up in and anti- Franklin Dam demonstration and being arrested for demonstrating. 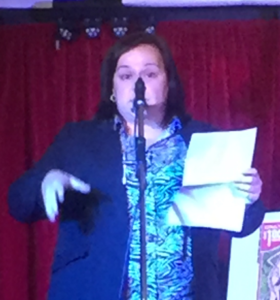 Knowles was reminded of his young band deciding to travel to Melbourne by train – not realising that the many instruments they carried with them would incur a $700 fee for excess baggage! Fortunately, his mother was able to sweet talk the station master down to $200 … for which she paid!

And that’s just a few of the many stories with which they entertained us for a few happy, convivial hours. Everyone has stories to tell. Most of us like to share them. Many of us do so fairly well. Some of us also have the timing and chutzpah to ‘Top That’!

Tickets to this cunning little show are available through Event Brite or at the door. But they sell out quickly, so booking is advisable. The next show is Wednesday 12th September. Go along and see just how much fun the age-old art of storytelling can be.