Though classified as a ‘rock musical’ Next to Normal is far from the ‘lightness’ that classification usually describes. Rather, it’s the harrowing story of a mother struggling with the crippling weight of bipolar disorder and the effect that it has on her, and her family. This is a musical for Now, even though it was written over ten years ago.

Awarded the Pulitzer Prize for Drama in 2010 (one of only eight musicals ever to receive the award), it also touches on drug abuse, suicide, the long-lasting devastation of grief and the vagaries of psychology and psychiatry, making it perceptive musical comment on contemporary society. 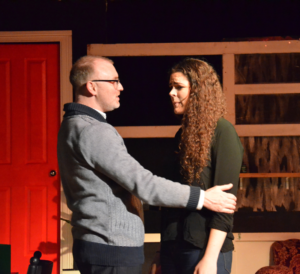 Director Kathryn Thomas says she is drawn to theatre that explores “what it is to be human and what it is to learn and grow”. Next to Normal certainly does that. It blends music and drama in a story that is heart breaking and very real.

In a compact, shared little theatre space, on a sparse yet suggestive set, Thomas has created the allusion of an ordinary suburban house – yet one that is slightly askew – just like the family that exists precariously therein.

With a talented and committed cast, Thomas, and musical director Steve Dula, have wrought a delicately sensitive production that blends the poignancy of Brian Yorkey’s words with the passion and complexity of Tom Kitt’s music. Thomas is a creative director who searches for the inner spark that ignites the characters. Whether in intimate dialogue or impassioned song, she has sought that spark in her cast as well.

Miriam Rihani plays the disturbed, disordered Diana, existing between the real and the longed-for. In action and in song, Rihani finds the anxious highs and desperate lows of this distraught character. She shrinks into herself, fearful, disoriented, wretchedly engaging.

Trent Gardiner is her loyal but worried husband, Dan. Gardiner shows the complexity of his apprehension in expressive voice and studied action. He stands steadfast and supportive, yet his face shows the anguish and disquiet he feels inside. 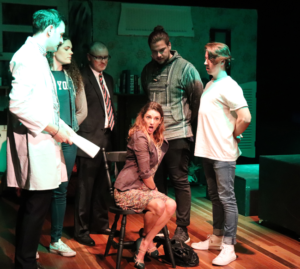 Their daughter, Natalie, is played with mature assurance by Chelsea Taylor. Taylor finds the complexities of a teenager torn between love and distrust at home, and in her relationship with her devoted boyfriend, Henry, played with warm, affectionate stoicism by Luka Bozic.

Doctor Madden, Diana’s psychiatrist, is played by Brent Dolahenty, who depicts the smug self-righteousness of this highly qualified but distant and insensitive character.

Christopher O’Shea, as Gabe, haunts the production as effectively as he does Diana’s mind. He moves lightly, his eyes fixed, vacant, compelling, his power over the family scarily gripping. This is a difficult role to sustain and O’Shea does it well.

A musical drama such as this requires an enormous amount of rehearsal to portray and control the varied levels of emotion and vocal intensity that this cast has achieved. That intensity would be even more effective if the amplification of the voices was not so high. In a space where the audience is so close, the voices so strong, the themes so confronting, less in that case, would achieve much more.