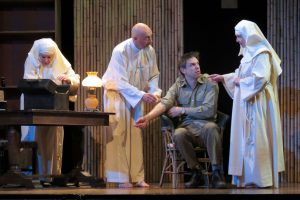 It is the 1950s In China. The Red Guard is on the rampage, destroying churches, missions and their schools and orphanages and forcing their congregations to join the fervor of the revolution. Many of the missionaries, priests and nuns suffer violence at the hands of the Guard: physical beatings, cruel forms of restraint, even death.

In an almost abandoned orphanage, five Irish nuns, a family they are sustaining and a priest who has escaped from the Guard await news of their future. Their fate is in the hands of the British Consul, the Red Guard and ‘The General’, who himself grew up in a Catholic orphanage.