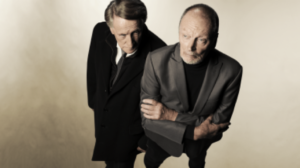 Luckily we had subscription tickets to Diplomacy because the whole season is sold out. Guess that’s because this production brings together two of our great, veteran Australian actors, John Bell and John Gaden, appearing for the first time, together, at the Ensemble. What a coup for this stalwart little theatre company! And what a play with which to tempt them!

Diplomacy is based on truth. A crazed Adolf Hitler, realising that defeat was imminent, gave the order that every landmark in Paris was to be destroyed.  The play is set just before dawn on the 25th August 1944. The German officer in charge of the attack, General Von Choltitz, checks the planned destruction.

Directed by the deft hand of vast experience, these two experts of theatrical skill are pitted against each other

John Bell, as Von Choltitz listens with cold detachment as explosives expert Werner Ebernach (James Lugton) explains the explicit details and timing. Explosives are set and primed under every monument. The main bridges over the Seine are similarly primed. As these are exploded, the river will break its banks and inundate the city. What doesn’t go up in flames will  be destroyed by flood water. It’s a devilish plot, but Lugton and the General discuss the destruction with cool, military detachment.

Von Choltitz dismisses Lugton to await the phone call to detonate. Von Choltitz prepares to wait out the last minutes by clearing his papers when the lights fail. In the darkness, a man has materialised. This is Raol Nordling, Swedish diplomat (John Gaden). His mission? To talk the General out of ‘burning Paris’.

Thus, we see these masters of the stage face to face. One, the career General, whose family Hitler has imprisoned and threatened to kill if he fails his mission. The other, the career diplomat, who has risked his own life to try to save the city he loves.

Bell sucks in his cheeks, pouts his lips, furrows his brows, straightens his shoulders and completely transforms into the consummate, Teutonic career soldier. His movements are restrained, economic, his reactions carefully considered. Yet chinks in his military armour appear as he gives final orders to his staff – Frau Mayer (Genevieve Lemon) and Hans Brensdorf (Joseph Raggatt) – and bids them farewell.

Gaden weaves a diplomatic web of persuasion and guilt as he strives to persuade Choltitz against the final order. As an argument is rejected, he steps away, as if thwarted, then turns back, and, with a wry smile, presents another. He is quietly persevering, subtly cogent. Bell counters this with steely determination, tenacious resolve.

Backed by a huge map of Paris that papers the wall behind them and the floor below, they scrutinise each other’s every movement, weigh carefully every claim and counter-claim. The tension created between them stretches tautly. Directed by the deft hand of vast experience, these two experts of theatrical skill are pitted against each other in a carefully scripted struggle between reason and conscience, orders and morality. 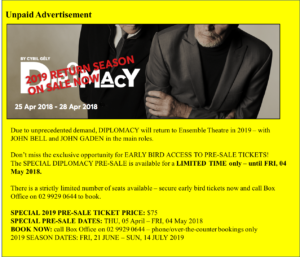