Alice Birch writes unreservedly and unabashedly about how women are treated at home, in bed, at work, even in the supermarket. She writes in a blatantly feminist voice that is loud and bold and unembarrassed. And that is what she demands of the cast that brings this play to the stage. Her stage instructions at the beginning of the play are explicit:

If any vomiting, crying or shouting needs to happen off stage, the audience should be able to glimpse it.

There shouldn’t be any set.

The play should be performed without props … and …

Most importantly, this play should not be well behaved.

Charles Sanders and the cast of Revolt. She Said. Revolt Again. have taken Birch’s instructions to heart in this play which is a no-holds-barred attack on chauvinism, misogyny, sexism and sexting. It requires a confidence and chutzpa from its performers. They must be daring, brazen, and be convinced about what they are saying and doing. In this production Violette Ayad, Anna Cheney, Enya Daly, Moreblessing Maturure, Eliza Sanders – and lone male Richard Hilliar – do so with lots of energy, guts and many (probably too many) costume changes.

This is not a play for the faint-hearted. It makes its points, sledge-hammer like . . . . .

The play is a collection of scenes – some longer than they need to be to make the point, especially if the play is 20 minutes late going up, as happened on opening night.

One scene questions the language and ‘art’ of seduction, another the implications behind marriage. In one awful scene, set on a stage awash with pieces of watermelon, a daughter violently castigates her mother for putting up with domestic violence. The play culminates with a fast-moving, but long, barrage of conflicting feminine images from cellulite to pornography, high heels to hymens. Actors move quickly around the stage bombarding the audiences with a kaleidoscope of words, signs and images that confront and provoke. 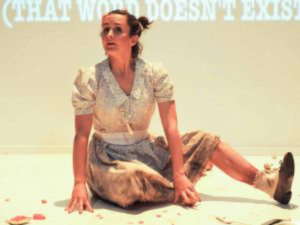 This is not a play for the faint-hearted. It makes its points, sledge-hammer like, in a manifesto of language and actions that are aggressively provocative – just as the playwright intended. In less challenging terms, the Co-Artistic Directors of House of Sands hope the production reflects “the enormity and complexity of the tasks still ahead to achieve equality and a non-patriarchal society”.

This review is also published in Stage Whispers magazine.