According to Hitler’s memoirs, it was his teenage viewing of Richard Wagner’s Rienzi –  about a Roman tribune who led a proletariat revolt against the nobles of Rome – that made him understand for the first time his destiny: to strengthen and unite the German Reich. Hitler had the autographed score of Rienzi with him in the bunker where he took his life in 1945.

Justin Fleming has fused this – and the life and opinions of the composer himself – in a play that highlights their similarities and the impulses that drove them.

On a glassy sunken stage designed by Patrick Howe, director Suzanne Millar brings Fleming’s 19th and 20th century protagonists into close proximity – with each other and the audience. There is no escaping their driving ambitions or their belief in themselves. With a fine cast, Millar, once again, gives Fleming’s work the pace, perception and emotional intensity his writing and characters deserve.

Jeremy Waters recreates the character of Richard in a performance that accentuates the zeal and passion that Wagner’s biographers attribute to the composer. He paces and persuades, panders and pervades, eventually getting his works on to the stage, paying his debts and making his name pervasively in the world of music and drama. Waters is a dynamic presence on the stage, always finding the complexities in and behind his characters.

Yalin Ozucelik as Adolf shows the growing intensity and vehemence as the character’s obsession with Wagner and his belief in his own power strengthens. The enthusiasm of his depiction of the young Adolf hearing Rienzifor the first times is almost childlike, the growth of his nationalistic zeal scarily abhorrent … but believable … especially as the dust of the bombing of Dresden falling in drifts around him accentuates his manic fanaticism. 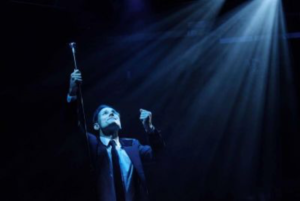 Wagner’s second wife, Cosima is played by Renee Lim. Almost a ghostly apparition, she ardently records the composer’s thought and memories – eventually handing over the autographed copy of the score to an imploring Adolf.

Thomas Campbell, Dorje Swallow and Ben Wood play the various personalities that influenced or affected the protagonists. Such is Fleming’s writing that these roles are no less exacting or demanding than those of Richard or Adolf and each actor meets the challenge of the different characters in strong and believable performances.

Millar keeps the pace fast, the focus intense. The eighty-five-minute performance passes in a concentration of action and emotion that culminates in a dark confetti of desperation and dejection.