“To invent, all you need is a pile of junk and a good imagination.”  Thomas A. Edison

“The more risks you allow children to take, the better they learn to take care of themselves.” Roald Dahl

The “Fruities” have cartwheeled their way into Parramatta celebrating 40 years of the youth circus that has been marvelled at by audiences across Australia and around the world. Who would have thought that what began as a local circus project for school kids in 1979 would evolve into a cohort of 8 to 19-year-olds attending school full time at the Flying Fruit Fly Circus School in Albury Wodonga? Or that they can go on to senior studies in partnership with Swinburne University? It’s an achievement that’s pretty awe inspiring.

JUNK is a worthy celebration of their skills – and the other subjects that are integral to the Fruit Fly education program. The show is based on their research into the life and games of their local elders, told through the acrobatic daring of these kids of the present. Their performance is fun and exciting, full of somersaulting momentum, just as everyone expects it to be. But it’s also a wistfully energetic response to the suggestion that kids of today are ‘over supervised” and aren’t given the opportunity to take risks or use their imaginations. 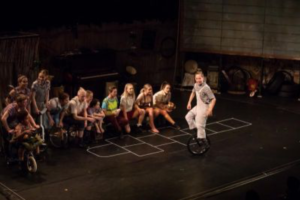 The show opens with a boy standing outside a fence. As he pulls on contemporary protective clothing – a high-vis safety vest, elbow pads, a helmet – the fence unfolds to reveal the backyard of an old farmhouse. The tyres and other ‘junk’ that lie about provide the suggestion of times past – as do the costumes of the kids that begin to crowd around him. Their disdain of his protective gear and his ‘fear’ of joining in their games, is the ‘through line’ that is used to demonstrate the skills of the amazing young cast.

Designed Joey Ruigrok, the ‘backyard’ set also incorporates space for the multitude of equipment that supports the acrobatic feats the kids, their trainers and director Jodie Farrugia have built into the production. As they entice the boy from the present to join their ‘games’, they showcase the “energy, expertise and commitment” of their 20 hours a week training.

They tumble over each other, through elastics, between hopscotch lines. They jump from a fence on to a teeterboard to propel a performer on the other end through a high double somersault. Some spin high in the air from narrow bands wrapped around their hands. Others leap from a wall on to a trampoline, using the force to propel themselves back up the wall in different, incredible ways. One spins multiple hula hoops around her hips, on her arms, around her ankles – all at the same time! Another rides a unicycle and an ‘ultimate uni’ (just a wheel with two pedals).  Others shimmy up a metal pole covered in rubber and, using incredible strength and concentration, balance in incredible shapes.

They work as a tight, supportive ensemble. There is no posing, no pretension – just an energetic enthusiasm for the work they love … and an implicit trust in each other that is not usual in those so young.

This is a great family production – as the bookings already show!