Tim Rice’s wry, contemporary lyrics take Joseph out of the dry verses of Genesis into a hip Canaan and rock’n’roll Egypt, where the biblical story of brotherly envy and Freudian-style dream analysis is a lot more ‘boppy’.

Co-directors by John Hanna and Katie Griffiths have taken the ‘bop’ to heart with a brisk, bright production that concentrates on the singing and dancing and accentuates the humour.

The cast is big and includes a chorus of sixteen very well-behaved children, who, led in by co-narrators Angela Therese and Annastasia Denton, sit along the front of the stage for the duration of the show. In their special moment, as the backing singers for Any Dream Will Do they gaze beatifically while Joseph, played by James Carter, sings– and their parents sit proudly in the audience.

Choreographer Tamara Scamporlino has picked up on the directorial vision, combining ‘Egyptian-style’ movements with modern hip hop and jazz in routines that are very effective. Though the choreography seems relatively simple, the progressions and pace must have required hours of rehearsal time, and Scamporlino and the cast should be really happy with the way their work lifts the production.

Musical Director David Catteral – with Daniel Woolnough and the orchestra – set the pace with Lloyd Webber’s catchy tunes, as Jacob and his Sons introduce the story … and the thirty-two-strong cast, colourfully and authentically dressed by costume designers Angela and Ann Hanna. This is one way the directors have achieved their goal of making the production less ‘pantomime-like’. 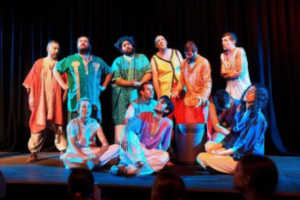 The other contributing effect is the set, which successfully makes the performance more visually realistic, taking the actors from Canaan to Egypt with symbolic set pieces, that have been carefully made to be safe and easily manipulated.

Cast members – principals and chorus – work as a cheerful, talented, committed ensemble who are obviously enjoying this first of Blackout Theatre’s 2019 musical season.