Table is a family saga that stretches over 115 years as it moves succeeding generations of the Best family from Litchfield in 1898, to a mission in Tanganyika and a commune in Herefordshire, before leaving them in South London in 2013. Written by British actor, adapter and translator, Tanya Ronder, the play was first performed at the National Theatre in 2013, directed by Ronder’s husband, Rufus Norris. Its twenty-three characters take the family on a journey of learning what belonging and identity can mean.

The thing that centres the story is a table, made in 1898 by Staffordshire craftsman David Best to celebrate his marriage, a table that is passed from one generation to the next, its stains and scratches recording the event and situations that have shaped the family’s history – and linking the multiple strands of the plot.  “Go on then table, speak”, one of the characters urges. “You tell us, you were there, you’ve always been there.”

Ronder’s characters are deftly created, their stories skillfully inter-twined. There is no fat in their dialogue, nor in the scenes in which they relate. Kim Hardwick’s direction is just as deft. There is nothing about this production that isn’t scrupulously planned and meticulously rehearsed. From the purpose-made table (built by Feather Edge), that is the centerpiece of each scene, to the spotlight that shines unerringly above it, to the carefully schooled accents and precisely timed choreography, this is a production that pays homage to a play that was cleverly conceived and extensively workshopped.

It is hard to single out any one performance. In a truly ensemble piece, where the cast of nine take on twenty-three characters, their varying accents and the style that depicts the time in which they lived – hesitant and formal in the late nineteenth century, more assured and outspoken as the years pass. Ronder has added English hymns and African songs to the play, eerily punctuating some scenes, raising the pace of others. Moments of suspense punctuate the tension that builds steadily – the shooting of a leopard in the bedroom of the mission; Sister Sarah Best offering herself to the hunter who rescued her from the leopard; the sad expulsion of Sarah and her illegitimate son from the mission. 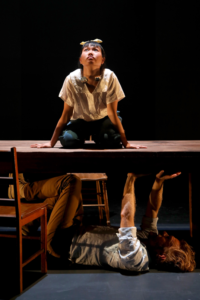 With only the table – and six chairs that are moved only when essential to the action – designers Isabel Hudson (set and costume) Martin Kinnane (lighting) and Nate Edmonson (music and sound) have made the maximum of minimalism, providing a background on which the cast can take five generations of the Best family cunningly through over a hundred years of historical events and social change. They artfully take the characters from young husband to stroke stricken grandfather; game hunter to grandfather trying to re-connect with the granddaughter he’s never met; gentle English women to nuns working in far-away missions to idealists holding the ‘speaking stone’ in a 1970s group home. Every character is clear once the shift in time and place is defined – and that is achieved relatively seamlessly by an astute director and her skilful interpretation of a well-written play.