Handel’s Messiah, composed in 1741, is an oratorio based on scriptural texts compiled by Charles Jennens from the King James Bible. It highlights three of the major events in the life of Christ. His birth (the Christmas section), the Passion (the events leading to the crucifixion) and the Resurrection (the Easter section).

It is traditionally performed leading up to Christmas – and this year in many parts of England it will be the culmination of a year of performances of Handel’s works in celebration of the 250th anniversary of his death.

For their special Christmas performances, conductor Brett Weymark and Sydney Philharmonia Choirs are always joined by The Christmas Choir, a non-auditioned choir made up of “passionate members of the community”. This year that choir numbered 475 Sydney men and women. The newly formed River City Voices from Parramatta also joined the combined choirs. Together these 651 choristers have spent eight weeks rehearsing with the orchestra and the soloists to bring Handel’s famous oratorio to Sydney audiences.

This year’s performance is special in that it is leads into their 100th birthday and will see them returning to their roots in the Sydney Town Hall, whilst the Concert Hall is undergoing refurbishment. 2020 promises to be a busy year with some special highlights, which Weymark describes as “an opportunity to explore our past, the present and our future as an artistic force in our city”. 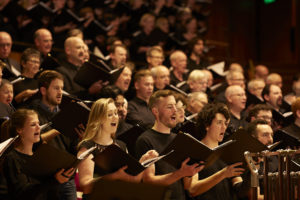 Back to Handel, the soloists and the orchestra. Soprano Celeste Lazarenko, countertenor Nicholas Tolputt, tenor Andrew Goodwin and bass-baritone Christopher Richardson brought their very wide operatic and concert experience to Handel’s dramatic musical interpretation of the biblical texts – with the choir rising almost like a gentle gasp to follow with each chorus. As they rose for the Hallelujah Chorus, so too did the entire audience, as is the tradition for that universally known and loved chorus.

The orchestra elegantly executes Handel’s moving musical effects. Twenty violins, eight violas, seven cellos and four double basses lead this orchestra with the composer’s special moments highlighted by oboes, the harpsicord, the bassoons, the timpani, the organ and the gentle sound of the lute in “I know that my Redeemer liveth”.

Brett Weymark’s special skill and vast experience is evident as he brings the performers together as a united, musical whole, their 2019 Messiah a fitting Sydney celebration of the composer who left it to the world 250 years ago.