The Wharf Revue – 2017 – The Patriotic Rag; Sydney Theatre Company  (Returning from tour to The Wharf from 24th October to 30 December). 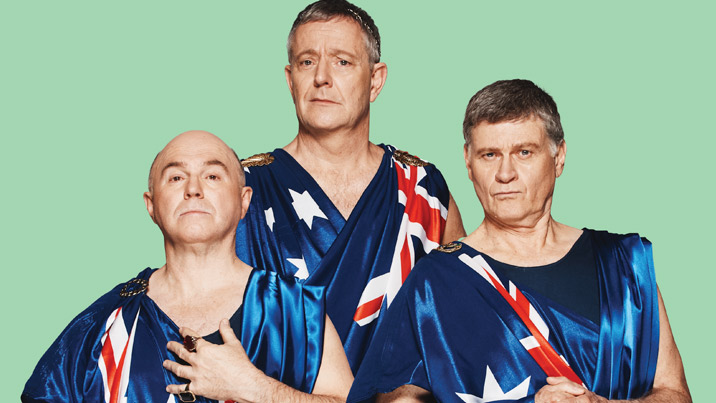 Biggins, Forsythe and Scott are joined by all-round-talented Blazey Best. What a combination! It’s a great show, and if it’s become even a little more ‘internationally’ topical, why the hell not? These days there’s not much hidden about the big game players in politics, their every quirk and nuance right out there for clever writers to satirise and clever actors to impersonate.

And that’s just what this enterprising team does. There are still loads of Aussie sketches and they are, as usual, exceptionally cunning – but the final elongated sketch is an international whirl of a Celebrity show, with host Donald Trump (Biggins in full, pouting presidential style) inviting the leaders of the ‘free’ world to “come on down”. Angela and Vladimir do the handshake thing and Best does a delightful job as Ivanca Trump who “got a job with Daddy”.

Best also takes Julie Bishop on a pretty energetic early morning work out and irons her vowels dead flat as a Jacqui Lambie. Best is a real asset to the show. She’s fast and slick and all her impersonated characters are spot on, especially her sycophantic James Ashby with Forsythe as one-national Pauline Hanson.

Phil Scott reprises his 2016 impression of ‘human headline’ Derrin Hinch and Biggins his lycra-clad Tony Abbott. But ‘tops’ for me this year was Drew Forsythe as a combination of Malcolm Turnbull and Jimmy Barnes doing “working Class Man”. It needs to be put on YouTube for posterity! Complete with jeans, a chambray shirt, leather jacket and a bottle of Evian water replacing the vodka, Forsythe did the whole ‘poor boy makes good’ brilliantly.

These revues are becoming better! STC is obviously throwing more money behind them every year. The graphics, costumes and staging today bear no comparison to the ‘bits and pieces’ they cobbled together for them in the first few years. There are not too many writers as astutely observant as these guys – or talented enough to pull off the stuff they write.