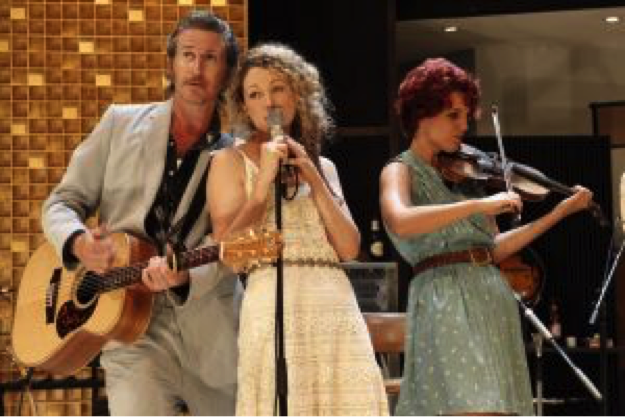 Backing this production as leader of a skilled musical trio, Tim Rogers watches a love story unfold around the songs from his solo album, What Rhymes with Cars and Girls. Written by Aidan Fennessy  – “ I was struck by the musical diversity of the album … and had one of those moments when I thought, ‘This sounds like a musical’… and took it from there” – the play is a raw urban romance set across class divides. Though it could well stand alone, the songs make it more gritty, more intimate and more universally appealing.

Fennessy’s script introduces the characters Johnno and Tash – played by Johnny Carr and Sophie Ross – in short autobiographical sentences that are very natural and establish a warm rapport with the audience.

He is one of two brothers, abandoned by their mother and brought up by their father, ‘a giant of a man’ who is now laid low by asbestosis and oxygen-dependent. She is living in a cheap bed sit and is short of cash. She orders a pizza despite the fact she can’t pay for it. He delivers it. She sweet talks him into leaving the pizza and coming to hear her sing with a band, after which she’ll be able to pay him the $19.95 she owes.

When he hears her sing, he’s hooked. She’s a little bit smitten too. They talk through the night, ending up sitting on the branch of a Port Jackson fig watching the sunrise. It’s the beginning of a sweet, gutsy romance that almost breaks the ‘north shore’ class barrier, flounders for months, then blossoms again.

With the sensitive perception direction of Clare Watson, Carr and Ross create a relationship that is beautifully believable and ……

Continue with the full review in Stage Whispers magazine, here.