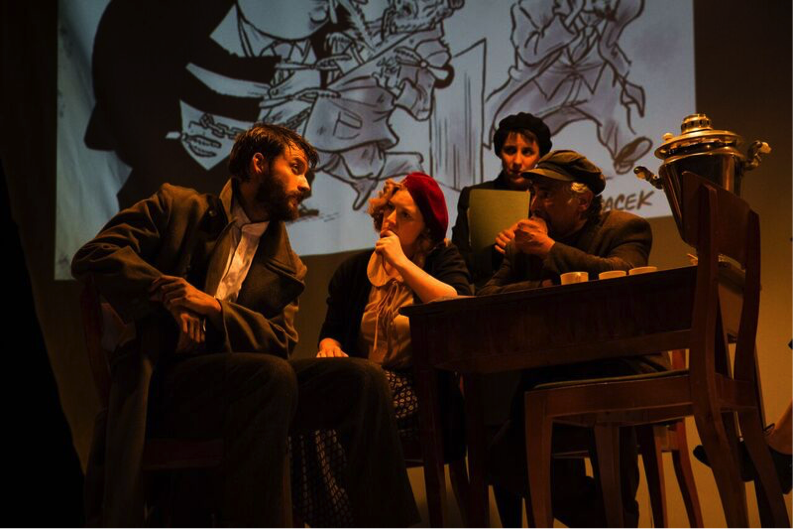 Cartoonists have to work quickly. Their art is current, topical – and if it works, it usually hurts. Their pencils are, as we know from Charlie Hedbo, blunt instruments that can be disastrously effective.

“A pencil in this play,” director Damien Ryan writes, “is the world entire…. It is the most human of tools, regenerative and destructive. The play, in the ugliest and most beautiful ways, tells us never to put our pencil down.”

The playwright, Howard Barker, he believes “has no interest in being politically correct or rational, in fact his moments of complete irrationality are the secrets to any understanding we might have of his deeply original plays.”

Barker, like the cartoonist, writes hard and fast, his characters formed in quick, sharp strokes, his themes intense, acerbic. Ryan’s direction misses none of that cutting pace or passion. This is a very powerful production. The direction, the acting, the set, the sound, the lighting, all linked by some brilliant cartoons and drawings, work together with a potency that hits, like Barker, hard and fast.

And, it is ensemble work at its very precise best. The time moves from early in World War I to the 1970s .The action moves from Hungary to Russia to England. There are over fifty characters and countless costume and set changes, yet the social and political punch of this long and complex never falters. It is another tour de force that reinforces once again the integrity of productions from this fresh, inspiring company. 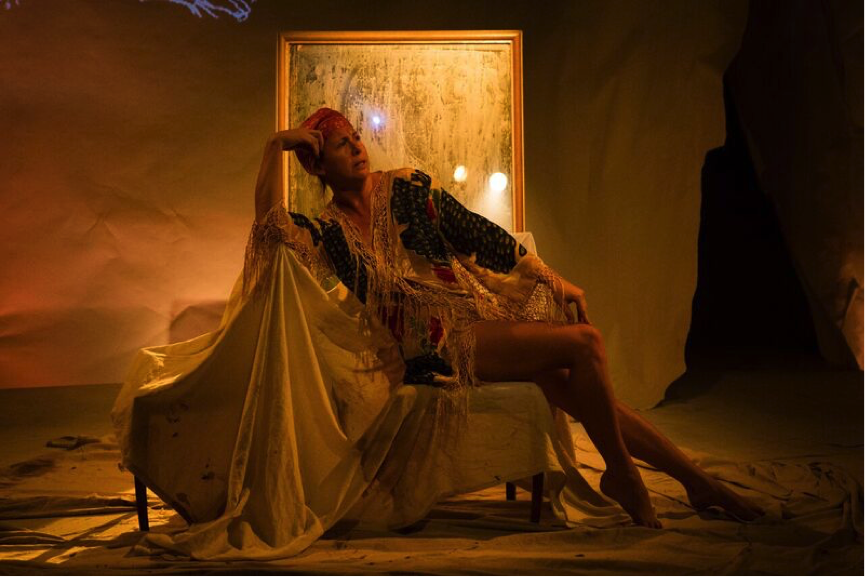 Designer Melanie Liertz sets the play on a wide rake, framed by huge sheets of torn paper on which satirical cartoons drawn by Cathy Wilcox and David Pope and beautiful life drawings by Nicholas Harding are projected. Whilst they provide a powerful backdrop to the play, they are as intrinsic to the action as the political events and characters they portray.

From the murky battlefields of the Austro-Hungary campaign, to the oppression of the communist regimes in post revolution Russia, to England in the throes of war in the 1940s, to post war social and economic change, scenes are played out in hard-hitting dialogue and graphic action.

Akos Armont and Sam Sullivan lead the ensemble with Angela Bauer, Danielle King, Monroe Reimers, Lizzie Schebesta, Amy Usherwood and Bruce Youngman. Every one of them is in the moment, their characters clear and convincingly strong. Whether cringing naked at the point of a bayonet, or defiantly naked in front of a group of artists; arguing the merits of art, or socialism, or satire; silently drawing, listening, or diligently taking notes of a meeting, they are real and sometimes frighteningly believable.

Between scenes they are just as involved, creating new settings by rolling metres of grass, thrusting posies into holes in the rake or passing stacks of chairs, a table, a cabinet off or onto the stage. Never is the tempo and urgency of the play broken, the choreography of these changes as carefully directed and deftly executed as the action itself.

Sport for Jove keeps raising the bar! This production raises it even further.