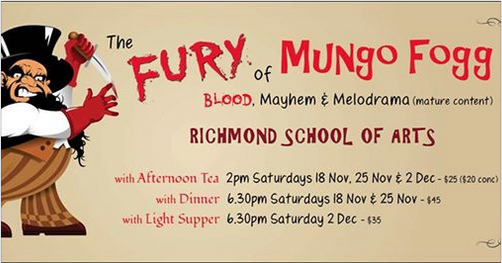 Richmond Players present this gory melodrama in the style of the old-time music hall, complete with a Master of Ceremonies (Michael Newcome), a pianist and sing-alongs between scenes. They go to a lot of trouble to do it right! The audience is seated at round tables, tastefully set. The afternoon audience is served with afternoon tea, the evening audience a two-course meal. Carafes of water are provided, but wine glasses are provided should you wish to ‘bring your own’! Members of the Players, dressed appropriately, serve food and clear tables. The atmosphere is friendly and sets the mood for everyone to boo, hiss or cheer as the predictable plot unfolds.

The play itself has all the usual melodrama characters – hero, heroine, aging parents, ‘poor boy’, and of course, the villain, Mungo Fogg himself, played with fitting posturing and bluster by Nicholas Noel who makes the most of every nasty threat, every sweeping flounce of his cape and every wicked, menacing laugh.

His partners in crime are just as villainous. Cribbins, played by Jeremy Collins is equally mean and malevolent. As is his wife, the notorious Pussy Galore, played with much revealing posing by Catherine Gregory.

In his bid to make a fortune in mining coal, Fogg needs to take over Lavender Cottage, and will stop at nothing – including getting rid of those who stand in his way. Much blood is spilt, and spilt often! Even the glossy, well-designed program is interspersed with drops of blood and a bloody handprint.

The Lavenders (Anne McMaster and Nathan Arnott) own the cottage. They are struggling to make ends meet but are determined not to sell up. Eventually their young daughter, Lucy, played with simpering heroine-style innocence by Heloise Tolar, is the only one left to defend her home – and her virtue – from the wily Fogg.

She is not alone, however! Kent Mayo pads out the plot with an array of other stock characters.

There’s poor, crippled Toby (Ben Curran0, lurching around the stage on twisted feet and a wooden crutch. Curran makes the most of this appealing character and the audience love him. There’s Cecil the gardener-turned-policeman, played by Aurel Vasilescu, who obviously relishes the comic antics of this stock melodrama ‘clown’.

But, as they say, there’s still more! Penny Johnson brings a bit of London ‘class’ as Mrs Windsor, who comes to stay at the cottage as a paying guest, and a ‘medicinal man’, Mr McGillicuddy (Nathan Arnott) and his wife and daughters, bring some Irish humour to the plot.

And finally, there’s the reluctant hero, Ernest, played by James Warren-Smith. He eventually gets his girl, but not without help … and more bloodshed.

Richmond Players brings a bit of fun and frivolity to the end of the year – and do it with enthusiasm and cheer.