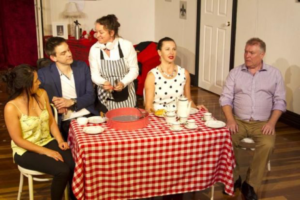 Elanora Players brings Private Lives into the 21st Century on a stylish set where silver, red and black predominate. Electronic devices are used to provide contemporary music for the tango and argument in Act 2, and by the maid Louise (Iwona Abramowicz), who dances to her iPod as she cleverly converts the balcony to an apartment between Act 1 and 2.

Director Sarah Lovesy has ensured the clipped English accents necessary for Coward’s dialogue prevail, despite the more modern setting and costumes – and breakable vases effectively replace the records that are thrown in the original directions.

Dan Ferris, as Elyot Chase, brings the character into the present with a laconic portrayal of contemporary wealth and social class. He gives the character bearing mixed with a little condescension and disdain that lends belief to Elyot’s duplicity, infidelity and eventual lack of concern over his behaviour.

Karen Pattinson plays Amanda Prynne. Tall and lythe, Pattinson depicts the social pretension and perceived glamour of this character with exaggerated posturing, which becomes much more natural and convincing in the second Act, where . . .

Continue with the rest of the review in Stage Whispers magazine, here.