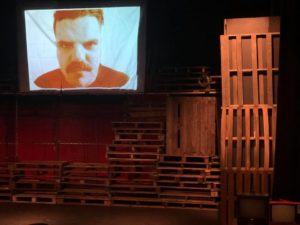 Adam O’Brien’s adaptation of George Orwell’s “chilling prophecy of the future” is suitably disturbing. He directs it on a wide stage surrounded by flickering monitors, scaffolding and stacked pallets. A huge screen hangs above the stage, where news items are broadcast to the forcefully attentive people of Oceania.

Fear dominates the scenes as Orwell’s sinister predictions of totalitarian rule and cruel retribution are enacted by a twenty-strong, grey and navy-clad cast who encapsulate the mindless acceptance demanded by Big Brother.

Nick Bolton is Winston Smith, who is haunted by snippets of memories of things past and finds the strength to defy Big Brother only to be betrayed by those he trusted and tortured and brainwashed until he screams his final acceptance. Big Brother has won.

As Julia, Winston’s forbidden love, Sophie Bentley is bravely fearless, tempting fate in the pursuit of love and symbols of the past.

Bryson Grenfell is impressive as Parsons, taking the character from simplistic acceptance of the regime, to pleading supplicant as he faces torture after being reported by his own daughter. Grenfell portrayal of this anguish is very moving.

A bright spot in this otherwise harrowing production is the scene where the Proletarians, dressed in period costumes, bewigged and heavily made up, tempt Winston with stories of a happier past.

Director O’Brien and his cast and crew have collaborated as a tight ensemble to bring this long and unsettling story to the stage. Scene changes are smooth and technological effects add to the disquieting atmosphere of this timely adaptation.