It can be a little harrowing to take on the task of directing such a well-loved and oft’ produced play, but first-time director Trudy Ritchie has obviously approached the challenge with dedicated zeal – and the support of an experienced and creative team of designers. Her production of Earnest captures the elegance and wit of Wilde’s writing as well as the ‘modish’ manners and style of the time. It moves quickly and efficiently without losing the impact of the ripostes and repartee or the hypocrisies that Wilde cleverly exposed.

Ritchie’s ‘dream team creatives’ Owen Gimblett (set) and Peter Henson (costumes) have come up with charmingly stylish ideas and Michael Schell’s lighting sets the atmosphere poignantly. Gimblett’s use of pale blue and white for Algernon’s salon is a perfect background for the opening scenes. This smoothly turns to become the garden in Jack’s country residence, with roses creeping up the latticed walls.

Ritchie has worked hard and intelligently with a committed cast and crew to make her production one that is a tribute to this final year of the Genesian at Kent Street.

Henson’s choice of light, pastel gowns for Gwendolen and Cecily provide a youthful contrast to the heavier, more stately costumes chosen for Lady Bracknell. Henson is always ‘correct’ when dressing the men in period plays, and this is no exception. Not only are the costumes right, but the creases are sharp and the cravats tied correctly! ‘Twould be good if every period play were given such care.

Ritchie’s cast have been schooled in the deportment of the time. They move gracefully on the stage, depicting the social ostentation of the period, and hence Wilde’s censure of it. Dialogue is delivered precisely with studied gestures and expressions that underline the nuance behind the words.

Cameron Hutt almost simpers as Algernon, his sharp wit covered by seeming nonchalance and feigned lethargy. His Algernon is swarmily indifferent but slyly astute (though his hair does ‘curlnaturally’ as Gwendolen observes, it is perhaps a little too untidy for the time, and, unfortunately, it is the actor who keeps fiddling with it rather than the character!). 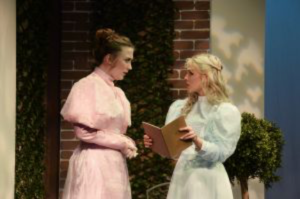 Ted Crosby is a very upright and suave Jack. He provides a perfect foil for Algernon, a stylish lover for Gwendolen – and a suitable target for Lady Bracknell’s famous scrutiny as a possible suitor for her daughter. That scene is always a favourite and Crosby and Melanie Robinson as Bracknell do not disappoint.

Robinson carries the character with a sense of grandeur and just a little pomposity. She wears the costumes with some flair . . . .