Harold Pinter’s plays are multi-faceted; his characters multi-dimensional. Getting inside them, even before putting them on the stage, requires insightful study of the script and the complexities and tensions it reveals between the characters. Director and cast need to work closely together in this process, melding ideas that arise with the director’s vision – and the original intention of the playwright.

In this production, Alex Bryant-Smith and Nicholas Papademetriou and their cast have done just this. They have been true to Pinter’s original setting and stage directions. They have researched and developed his intricate characters and their personality traits – then depicted their strange relationships in a production that, though set in the 1950s, and absurdist in style, resonates strangely with the modern world where homelessness, exclusivity, bullying and menace have become disturbingly prevalent

. . .in terse dialogue, deftly delivered … and action that has been carefully considered, precisely directed and diligently rehearsed.

Stephanie Howe’s set creates the atmosphere of squalid loneliness in which the play is set. A tottering wall of over two hundred cardboard boxes sitting end on end rises from the stage. A doorway leads off to a dark landing. A ragged cloth hangs in the only window. A bucket is suspended ominously from above. Two iron beds and a chair are surrounded by a collection of household paraphernalia – a push lawnmower, a kerosene stove, a vacuum cleaner; a toaster, footstools, rugs, a shopping trolley, a spoked clothes horse, stacks of newspapers and books – all them intrinsic to the plot. Her costumes are of the time – and enhance the three disparate characters that inhabit the set.

Lighting (Sophie Pekbilimli), and sound effects (Glenn Braithwaite) that seem to echo through an empty pipe, add an atmosphere that is just a little threatening, definitely a little strange. This is confirmed by the opening scene where Mick (Alex Bryant-Smith) sits, staring silently and aggressively, then exits abruptly – and does not re-appear until much later. Such is theatre of the absurd. 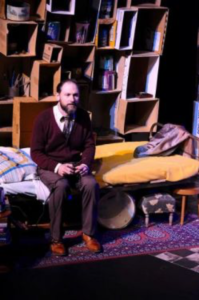 Nicholas Papademetriou is outstanding as Davies. Convincingly dirty and dishevelled, even down to holey socks and torn trousers, Papademetriou creates a Davies that has run the gauntlet of living rough and trusts no one. He is suspiciously watchful, continually alert, but cleverly perpetuates an air of confused bewilderment as he shuffles in open sandals, constantly sniffing, rubbing his nose, scratching his head, rolling his eyes, repeating phrases, stumbling over words. Davies is an opportunist, prone to deception, and Papademetriou plays him with convincing cunning.

Poor Aston, kind and easily deceived, is played with unassuming gentleness by Yalin Ozucelik. He creates an Aston who, quiet and self-effacing, ushers Davies into his home and unwittingly falls prey to his deceits and demands. Ozucelik finds the innate sadness . . . .