Though opera buffo doesn’t traditionally have the same classical ‘standing’ as the dramatic operas, the music is just as beautiful – and there is much more opportunity for directors to have fun with the action and the costumes. Simon Phillips certainly did this in his 2014 production of The Turk in Italy, and revival director Andy Moore has treated it just as playfully in this reprise. In Opera Australia’s own words: “This production is a frivolous take on a comedy that is not often performed”.

Frivolous or not, the music is Rossini as a 21-year-old creative wizard, mixing his musical talent, with, like Noel Coward, “a talent to amuse”. The orchestra, led by Andrea Molino, with Assistant conductor Siro Battaglin at the Fortepiano, plays with as much joie de vivre as the performers on stage. Together they make this almost silly, yet musically stretching opera, a frivolous musical romp that lifts the spirits and makes life seem a lot brighter.

. . . it is the acting that takes this production beyond comic to comedy . . . . . elements of commedia del’arte are carefully inter-woven with the music . . .

The opera is set in a seaside town near Naples and Phillips has moved the time forward to the 1950s and a bar in a classy seaside resort. Costume designer Gabriela Tylesova has picked up the 50s style, “exaggerating the clashing colours of the time” in multi-coloured swimsuits, tight waists, gathered skirts and strappy sandals. The men are equally flashy, in shiny fabrics, three-piece suits, pegged pants and pointed shoes. The fancy dress ball in the second Act is a plethora of Elvis and Marilyn Monroe lookalikes rocking and rolling to a classical beat – but introduced cheekily by the very faint notes of “Love me Tender”.

Rossini and librettist Felice Romani had fun with the interlocking love stories of the plot, which they explained cunningly through the poet Prosdocimo (Samuel Dundas), who is finding trouble imagining the scenario for a farce he is writing. The flirtatious heroine, Florilla (Stacey Alleaume), precariously balances her lover Narciso (Virgilio Marino), the visiting Turk, Selim (Paolo Bordogna) and her jealous husband, Geronio, (Warwick Fyfe). The arrival of Selim’s former lover, Zaida (Anna Dowsley), with a band of gypsies, causes more complications. 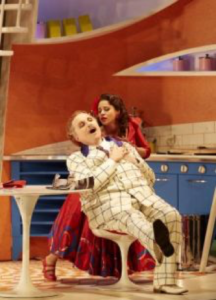 Prosdocimo’s attempt to unravel the tangle by suggesting disguises causes even more confusion, but, like all good comedies, the couples are re-united, poor Narciso is left on his own – and Prosdocimo succeeds in finding a plot. Phillips uses a great deal of poetic licence in his Surtitles, with words and phrases such as “boofhead, “nong” and “desperate and dateless” peppering his translation.

The plot gave Rossini the opportunity to write less for solo voices and more for ensemble. There are duets, trios, quartets and a thrilling comic quintet in the ballroom scene. Stacey Alleaume obviously relishes the coloratura of Rossini’s crescendos, thrilling the audience as the whispered beginnings of her solos reach higher and higher. Warwick Fyfe (and the orchestra) delight in . . . .